Find a Child to Sponsor

A Thank You From Valerie, 2018, who is now in medical school

Biography of Valerie in Her Own Words:

I was the third born of six children, raised in Kibera Slums in Kenya, the largest slum on the continent of Africa. As a child I was very playful and jovial although living in the slums was quite the challenge. There was an inadequacy of basic amenities especially toilets. The few pit latrines that were around were poorly maintained and externally unhygienic. The slums also had very poor drainage and during the rainy season our house would get flooded. My elder sister and I would help my mum drain the water before going to school each morning. The crime rate was also very high. Gangs of thieves roamed the streets at night and it was very unsafe to walk at night.

One evening while coming back from work, my father was attacked by a gang of robbers and was murdered. I was only three years old then and my mother was with child. She was expecting twins, my two brothers Henry and Franchesco. It was very difficult and such a painful experience for the family. As a three year old I did not understand much about what was happening or what death actually was all about. In my mind I knew he was sleeping and he can always wake up. The one thing I’m most grateful about is the support we got from our extended family and the community.

My mum was such a hard worker, I’ve been told I take after her. She worked two jobs to fend for us. She was also such a staunch Christian which really paid off because my sister and I got sponsored by the local Catholic church to study at a mission school. It would take us twenty minutes to walk to school each morning. I loved the school not because I was passionate about learning from the beginning but because they provided us with food. My mum could not afford to provide three meals a day so it was commonplace to skip breakfast and walk to school on an empty stomach. I actually got used to it. Studying, however, was never a struggle. I did well effortlessly. I received so many awards for good performance, most of which were books and pens.

In the year 2008, my mum was involved in a road accident that left her paralyzed. She could no longer fend for us. There being no capable relative to take care of us, we were taken to an orphanage. I’ll never forget when we were dropped off at the home, I was terrified. It was a whole different community. I was not sure that I was ever going to fit in. I knew that I had to switch schools and the thought that I may never see my old friends, classmates and teachers again, tore me apart. I wished there was another option. The children were so friendly and the environment was more conducive then the slums. The home had 125 children. We would share a lot about our past and listening to other people’s stories made me realize that I am not all alone. There were people who had gone through worse and yet stayed strong. I was just happy to have my basic needs met. I resolved to let nothing that has happened define me. I made a conscious decision to carve my own path and stay strong.

Although the orphanage was a great rescue for disadvantaged children, it had a few drawbacks. The one thing I found most upsetting is the funds were sometimes mismanaged. I remember we would stay out of school for weeks, sometimes months due to lack of tuition fees yet the owner of the home was living very well away from the orphanage. Education was not top priority for the home. In the years to come, my mum filed for us to leave the home, reason being we were not going to school. In November the same year we left the home after being there seven years. One of my aunts took us in and that’s where we have been living ever since.

In my final year of high school I remember I was between a rock and a hard place. The orphanage owed my high school a total of 70,000 KSH. ($700 USD) in tuition arrears and I was only two months away from sitting my final exam. Now the principal was taking no more excuses. I was kicked out of school. The only option being to pay up or else I would miss my final exam causing me to repeat Form 4. I felt so stranded and helpless. I didn’t know how to carry on from there. Lucky for me, my older sister was already a part of Caring for Kids of Kenya’s program. She talked to Linda Wilson about my situation and in a week I was back in school. I am eternally grateful for being part of the program, CFKK, for it has opened my world to opportunities I never fathomed. So I got back in school and did my best .

I worked very hard in high school determined to do my best. I graduated out of high school with a mean grade of A- on my National Exams. I was the third best student in my school. Connecting with CFKK is an opportunity I’ll forever be grateful about. Linda is like a second mum, she is genuinely caring and so passionate about our education. She found loving sponsors for me and helped me continue with my education.  In my opinion gifting a child with an education is the most priceless gift you can give them. This is because it empowers them to be useful people in the society and it also encourages others. I would like to study medicine and become a doctor. I’m passionate about helping people. I especially love working with children and help them to recover and just see them smile again. 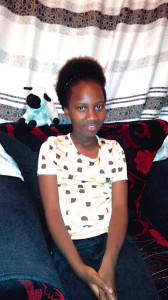 Fransisca is 11 years old and will not be able to continue school in January unless we find sponsors to help. She and her four-year-old brother are being raised by their single mother. Her mother washes clothes for money to feed her family. This work is very inconsistent so it is a constant struggle to keep her daughter in school. Fransisca is a very bright girl who attends a small unrecognized school where the teachers are high school students. Since she is the first born, she cares for her younger brother as a young mother would do even though she is only 11. She has very little time to do her homework. Attending boarding school, gives her the opportunity to devote herself to her studies.

1. Help her and her family escape poverty.

3. You will help empower a young girl in a country where, up until recently, women were not educated as men.

4. Educating women makes them independent and capable of making their own decisions in their lives.

You will truly make a difference in a young girls life by clicking on the button below to donate.